They were already a thing of the past, but now that you're over 30, they're reappearing massively, the pimples? Late acne is the name of the problem and affects many of you, at least in phases. But don't despair, help is at hand. Black cumin oil gives natural cosmetics the finest anti-pimple power. Wait a minute, oil for oily skin? Oh yes, because this oil has special properties. It eliminates impurities and at the same time protects against drying out. Black cumin oil spoils the complexion twice over. 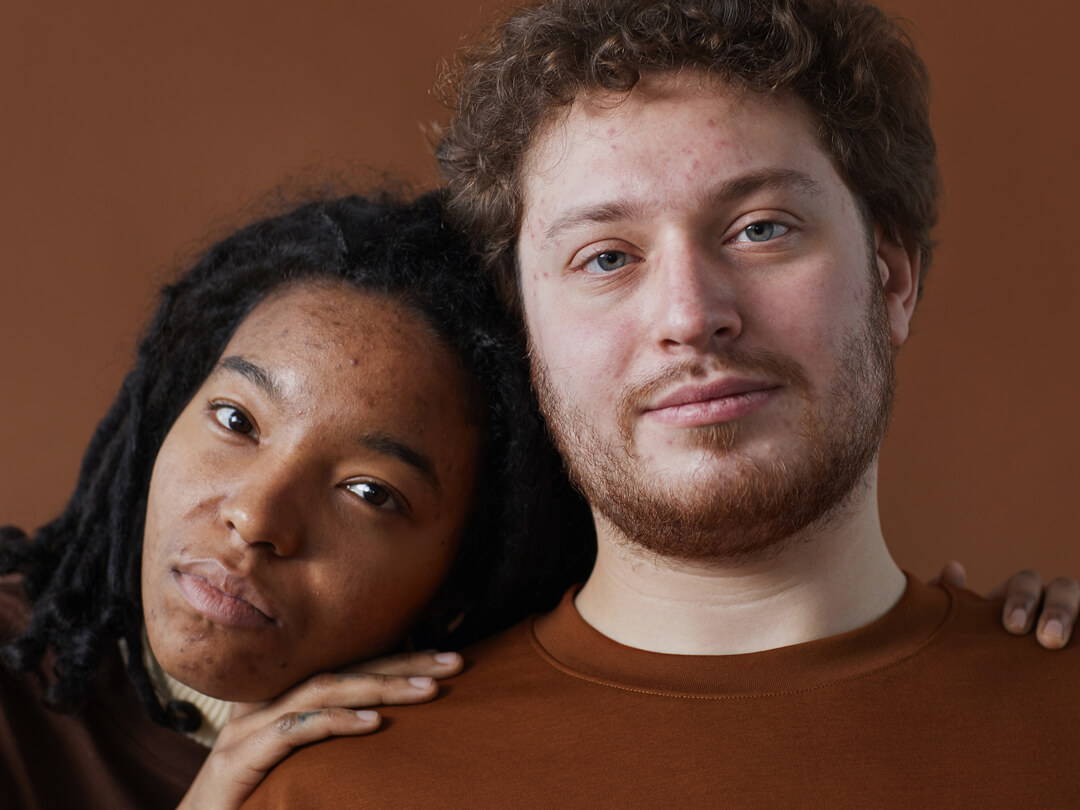 A herb has grown to combat oily and impure skin: black cumin. The oil of these pretty flowers is extracted from their seeds, which look like mini charcoal briquettes. And they are full of good qualities that put an end to pimples and blackheads. Black cumin oil is more of an insider tip here, but in Arabia and India it has been considered a beauty elixir for centuries. So it's no wonder that its effectiveness has already been well researched and proven. Find out how black seed oil removes impurities from the face and décolleté without irritating the skin.

🧖‍♀️ Black cumin oil helps against blemishes at any age, but adult skin has special needs when it comes to «depimpleing». So let's take a look at its great effects on late acne.

Late acne: Where does impure skin come from in adulthood?

Blemished skin can really put you in a bad mood. When you're over 30 and suddenly feel like a pubescent crumble cake, that's tough. Now that everything was going well and you were finally completely relaxed with your look, pimples and papules are suddenly sprout again in heaps. Tard acne can have various causes, such as stress, hormones or diet. Of course it is important to work on the causes, but you can also improve a few things with skin care - including with black cumin oil, but more on that in a moment. Because something is different now than Sweet Sixteen...

One way or another, there is an additional difficulty in adulthood: while impure teenage skin is normally well moisturized, adult skinis drier. Maintaining the NMF (Natural Moisturizing Factor) becomes harder work over time. Water is lost more easily, the skin loses its elasticity and protection. She now reacts immediately irritated to aggressive treatments. Resist the urge to degrease, pick and scrub away pimples with a vengeance - you gotta be strong now! Leave the cleansing gels and lotions you know from your teenage years behind, otherwise you'll get reddened, scaly skin as well as impure skin.

But even with comparatively gentle degreasing, you may have the feeling that signs of skin aging are increasing, i.e. the first wrinkles are getting deeper or you see more dryness lines. It goes without saying that the choice between pimples and wrinkles is difficult – you have left one behind and you are not yet ready for the other. What you need now is a new strategy that suits your adult skin.

Black cumin oil is a very potent active ingredient oil that has been used for beauty care in the Mediterranean and the Orient for ages. Today we also know why: it contains valuable active ingredients that pay off especially with impure skin. Because they bring exactly the 3 skills that your skin needs now:

Studies show that significant improvements occur after 60 days. They even show that a black seed tincture is just effective than the traditional benzoyl peroxide acne treatment, but much less aggressive1 . So, if you have concerns about applying oil to impure skin, you can safely sort it into the skin myths ;-) But let's take a closer look at the talents of black cumin.

First things first, because let's be honest, this is the problem you're most interested in. Pimples are caused by bacteria that feed on excess sebum. Of course, if the skin produces too much of it for some reason, it's a feast for these pests. They multiply happily and are trapped in the pores in many places by the sebum. Underneath they do their mischief and cause papules, comedones (the one with the black dot in the middle) or inflammatory pimples.

So how does an oil help here? The seeds of the black cumin counteract the impurities. Thymoquinone2, essential oils and other active ingredients fight bacteria and inhibit inflammation. In this way they kill the polluters and alleviate the unsightly effects. Redness and purulent inflammation subside and your complexion looks more even. The structure of black cumin oil is so slim and flexible that the active ingredients can penetrate to the spot. This gets to the root of the problem and eliminates it particularly effectively.

Doesn't it clog the pores? No, Don `t worry. The lipids in black cumin oil are mainly polyunsaturated fatty acids such as linoleic acid and γ-linolenic acid. As already mentioned, they manage to pass through the cell membrane so that they deep in the skin can become active. So they don't cling to your skin from above like mineral oils do, but are absorbed and processed.

The lipids in black cumin oil also have a positive effect on cell metabolism. They soften calloused areas and regulate the unbalanced sebum production, so that impurities do not appear in the first place - at least not so severely, a pimple here and there can never be avoided.

Linoleic acid is an important component of the natural skin barrier and black cumin oil has plenty of it. It provides the skin with supplies for regeneration and helps it to protect itself against moisture loss over the long term.This is a huge advantage over traditional anti-pimple routines that consist of harsh washing and clarifying because even the milder ones dry out the skin. Surfactants do not distinguish between «good» and «bad» lipids, but also wash away parts of the protective barrier. To compensate, conventional care is based on supplying the skin with new moisture. But she does little to keep them to herself.

Oils have a clear advantage here. Instead of tricking or fighting the natural barrier function, they support its function. Nourishing lipids combine with water on the skin and absorb as a dream team. They repair porous or defective spots in the protective layer to retain moisture. The result is not just a better moisture balance, but also protection against impurities, a firmer complexion and better prevention of dryness lines.

Clear and care - 2 birds with one stone

Especially when you're frustrated because your previous skin routine is causing tension, black seed oil is a game changer. It is not only well tolerated, but also has wound-healing properties. You're even doing irritated skin a favor. It also fights impurities, regulates sebum production and regenerates the protective barrier. With skin-friendly care, you don't have to choose between pimples and premature skin aging, but clear your complexion without losing moisture. You can say goodbye to the gentlemen ifs and buts with this care routine. And this is what she looks like...

Your care routine for impure skin

Since the black cumin oil already has an anti-pimple effect, you can save yourself degreasing cleaning gels. Instead, simply wash your skin thoroughly with lukewarm water and then apply a combination of moisturizing serum and facial oil

And very important: carefully remove make-up in the evening. But gently. For example with a make-up remover oil, which also contains black cumin oil. In this way, the good active ingredients remain on your skin overnight and can take effect in peace. By the way, the most thorough way to clean is with the Oil Cleansing Method. You should avoid an additional rich night care, it is not even necessary. You can only apply a light moisturizing serum if you feel your skin is particularly dry. So you slip completely relaxed into the sheets.

Once a week you can treat yourself to a gentle clay mask, preferably with white (kaolin) or pink clay. It supplies minerals, refines the complexion and makes you look fresh.

Your personal skin consultation is just an email away

Close the jar and get rid of perioral dermatitis