shopping cart
you are reading Vegan skin care - why and how?
Split
previousnearest

Vegan cosmetics are more than a trend. There are good reasons to avoid products with animal ingredients. Is your lipstick literally blood red or is your favorite scent a real hangover? Animal products often hide gruesome stories but also ecological aspects. And giving up isn't as complicated as you might think. We clarify which ingredients are often or always of animal origin, how you deal with them and what vegan has to do with cruelty-free. 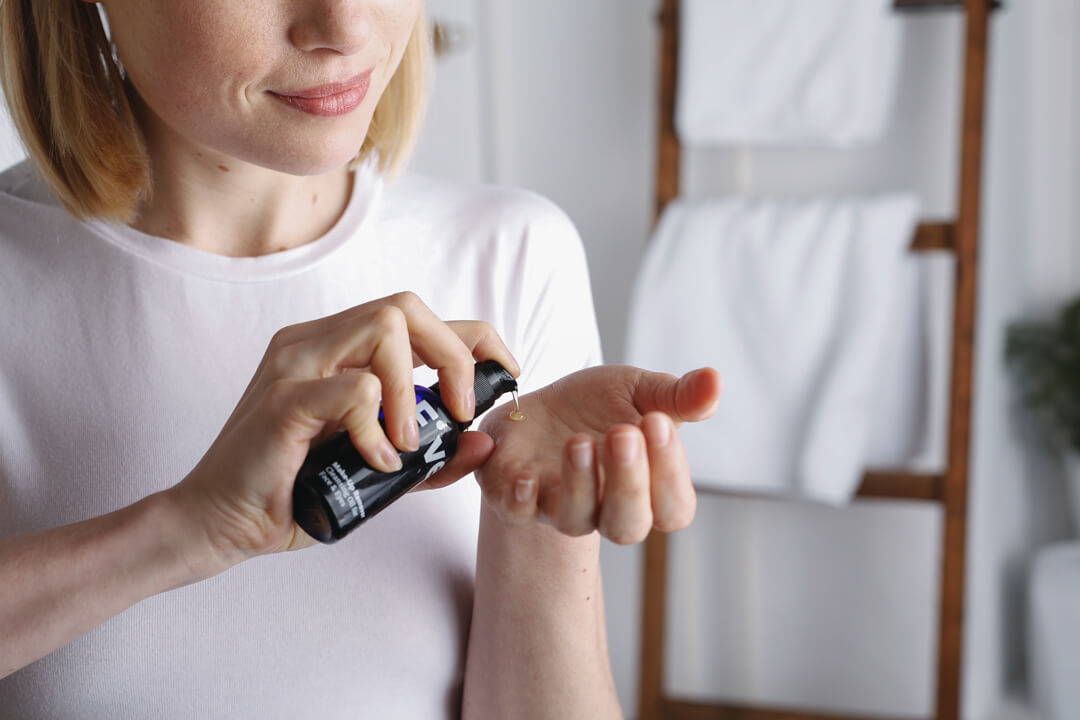 That speaks for vegan cosmetics

There are several things that inspire us to switch to purely plant-based products. With their rejection of animal products, many are setting an example for animal welfare. They do not want to further support the often catastrophic conditions under which farm animals are kept by their consumption. Environmental protection also plays a role. Because factory farming drives the pollution with greenhouse gases and thus climate change.

In any case, you are making an environmentally conscious decision with vegan products. Taking this step with cosmetics makes sense even if you still prefer to drink your cappuccino with milk. After all, we have to start somewhere.

When it comes to a vegan lifestyle, many people naturally think of food first. But it also applies to cosmetics. Animal ingredients are found in many products. Bar soaps from conventional production often contain tallowates, i.e. animal fats. The red dye in lipstick, nail polish, blush, and the like often comes from lice. And a popular ingredient in lip balm is beeswax. But ingredients of animal origin are also hidden in other products.

💡 At the end of this article you will find a list of ingredients of animal origin that you often encounter in cosmetics.

How to find vegan cosmetics

The list below will help you with your shopping. But there's an easier way than searching the ingredients list for animal products on each product. Namely the vegan flower of the Vegan Society. If a product has this symbol, you can be 100% sure that it is vegan.

🌟 FIVE makes vegan natural cosmetics: Our products are listed by the Vegan Society and bear the vegan flower.

There are also helpful apps. This includes, for example, the vegan shopping guide from PETA ZWEI or the CODECHECK app. You can even activate a vegan filter in it. Both are available in iTunes and Google Play Store.

🌱  Good to know: Vegan cosmetics say nothing about the naturalness of a product. Conventional cosmetics can also carry a vegan label.

The topic of animal testing is at least as important as the keeping conditions of animals. There are a number of myths about this.What is the current situation and what can we - you and I - do to reduce animal suffering?

The current status of animal testing

Since 2013 animal testing for cosmetic products has been banned in the EU This is not binding for Swiss manufacturers. However, they usually stick to it because they also sell their products in neighboring EU countries. However, you have to assume that probably all cosmetic raw materials without exception have been tested on animals at some point in their history. This has only ended since the ban in 2009. This prohibits animal testing for raw materials that are exclusively used for cosmetic products.

The crux of the matter is that most of the substances found in cosmetics are also used in the chemical industry. For these other applications, they must comply with the safety standards required by the chemicals legislation REACH. This often even prescribes animal testing! So animal tests are still carried out on newly developed raw materials if they are used in addition to cosmetics, for example for paints, varnishes and cleaning agents or nanomaterials.

Cruelty-free manufacturing - what we do as a company

Animal welfare is very important to us at FIVE. This determines our entire product development, the production and the purchase of raw materials.

Cruelty-free shopping - what we as consumers can do

There are many good reasons not to use animal products in your cosmetics. Thanks to modern processes, there are now plenty of opportunities to produce active ingredients cruelty-free. Other ingredients can be easily replaced with vegetable oils or extracts. So you don't have to do without anything. And there is also a good conscience.

This overview helps when shopping if you want to switch to purely herbal cosmetics. It contains the most common ingredients of animal origin with INCI name, description, use and vegan alternatives. The ingredients are listed in alphabetical order. And beware, some of them are also available from plant sources!

Bees excrete the wax to build their honeycomb. It forms a protective film on the skin that prevents it from drying out. Here's how you find it...

These thickeners have a film-forming effect and work in a similar way to gelatin (see below). They are obtained from the shells of crustaceans and insects.

This lipid derived from animal fats is naturally present in the skin. As a component of the cell membrane, it plays an important role in the regeneration and protection of the skin. At the same time, it acts as an emulsifier in creams.

The amino acid is often obtained from animal keratin (see below).

🧴 Often in wound ointments, hair care products and creams
🌱 Vegan alternative: L-cysteine ​​on a plant basis is now also available, which is produced in two different processes. However, it is unclear to us whether animal testing was used for the development of these raw materials. So better to avoid it altogether.

Elastin keeps things elastic, as the name suggests. The protein is obtained from the neck tendons of cattle.

The protein smooths the skin and is popular as an anti-wrinkle ingredient. However, it is obtained from calf blood.

This effect pigment is found in many decorative cosmetics, especially those that shimmer beautifully. Guanine is obtained from ground fish scales.

When we think of this gelling agent, we first think of gummy bears. Obtaining it from the bones, skin and sinews of animals, i.e. slaughterhouse waste, is less appetizing.

Bees feed their queens with this nutrient-rich secretion. It has a smoothing effect on the skin, which is used in anti-aging products.

Ghee is made from cow's milk. It is clarified butterfat that is used in Ayurvedic cuisine. But we also encounter it in cosmetics.

Glycerin has a moisturizing effect. Animal glycerin is a by-product of the saponification of beef tallow (see also Tallowate below).

🧴 Often found in lotions, creams, make-up (foundations), after-sun preparations and other skin care products as well as shampoo and conditioner
🌱 Vegan alternative: vegetable glycerin. This is obtained from the saponification of vegetable oils.
☝️ At FIVE, for example, we use organic glycerin from coconut oil in our FIVE face serum

This ingredient binds moisture in the skin. It was originally always made from animal components, mostly from cockscombs. However, the production is quite complex, which is why hyaluronic acid is mostly synthetically produced today.

The pigment gives make-up and nail polish their strong red, more precisely blood red. Because when it is extracted, you lose your desire for color: For every gram of carmine red, around 150 cochineal lice are dried to death and the color pigments are then boiled out of them.

🧴 Commonly found in nail polish, lipstick, rouge and actually everything that is red in color
🌱 Vegan alternatives: plant pigments from beetroot (Beta Vulgaris), Raspberries (Rubus Idaeus Fruit) and the like, and Iron Oxide ( CI 77489). There is also a synthetic carmine E124, which is not suitable for natural cosmetics.

This protein is part of the hair structure. So keratin provides fullness and healthy shine. Less beautiful: It is made from ground hooves, horns and feathers.

This protein ensures firm tissue and a firm complexion. But it is derived from the fat or bones of cattle and pigs.

🧴 Often found in skin creams and serums
🌱 Vegan alternatives: There is no such thing as a plant-based ingredient that replaces collagen. However, similar effects are achieved with active ingredient combinations of amino acids, antioxidants and plant extracts. Face massages also stimulate the skin's own collagen synthesis.

This is the fat that sheep secrete to protect their fur from getting wet. So it seals well. Lanolin is obtained from the shorn wool. So, unlike civet (see below), for example, it is not taken directly from the sheep.

Lecithins are compounds made from fats and glycerin that are found in our cell membranes. They regulate the pH value, smooth the skin and have an antistatic and emulsifying effect. They are obtained from animal nerve tissue or eggs.

Lactic acid regulates the pH value of the skin and is a metabolite in the blood and muscle tissue. However, it can also be produced synthetically or replaced with citric acid.

🧴 Often found in facial cleanser and tonic
🌱 Vegan alternative: Vegan lactic acid (E270) is used by Produces lactic acid bacteria from sugar solutions and has absolutely nothing to do with milk.

Like beeswax and royal jelly, this resinous secretion comes from bees. It is popular in cosmetics because of its antibacterial effect.

Soap is traditionally made from animal fats, mostly beef tallow from slaughterhouse waste.

🧴 Often in soaps
🌱 Vegan alternatives: soaps made from coconut oil (Sodium Cocoate), olive oil (Sodium Olivate), palm oil (Sodium Palmate) or other vegetable oils
☝️ You make an environmentally conscious decision with soaps from organic production, which does not encourage overexploitation of nature.

The silkworm spins the fine threads that also make skin and hair silky. In cosmetics, silk is found not only in threads but also in powdered form and as silk protein.

Stearic acid acts as an emulsifier and stabilizer in cosmetic products. Animal stearic acid is taken from pig stomachs. But there are also vegetable sources.

Squalanes smooth skin and hair. They were originally obtained from shark liver. However, vegetable sources are now represented more often.

🧴 Often found in skin and hair care products
🌱 Vegan alternative: squalane from the pressing residue of olives or sugar cane
☝️ Use with FIVE we squalane from olives.

Vitamin A stimulates regeneration and has an antioxidant effect. For cost reasons, it is usually obtained from animal sources such as butter, eggs or fish liver.

🧴Common in anti-aging creams and serums
🌱 Vegan alternatives: Vitamin A made from carrots, apricots or lemongrass

Myths: These ingredients are now vegan

As the list above suggests, there are many ingredients that can have both animal and plant sources. In the meantime, the vegan solutions often predominate in practice, for example if they are more stable or more easily available. There are also some ingredients that are no longer derived from animals on the European market.

This includes, for example, ambergris or ambergris. The fragrance is popular for musky perfumes. In the past, it was obtained from a digestive product of the sperm whale. The whales excreted it, after which it was washed up on the beaches in the form of greyish lumps. Whale products have not been allowed to be traded in Switzerland under the species protection agreement for a long time, so for a very long time. Nowadays, the fragrance therefore comes from synthetic sources.

You can take urea without hesitation

It is similar with urea. Urea is part of the skin's natural moisturizing factor (NMF). It is often found in intensive care for dry skin. Urea has only been produced artificially since 1828. This is also no longer an animal ingredient.